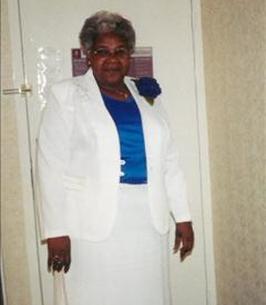 Linda Ruth McGee 79 of Abilene, fought the great fight up until her last few weeks and went home with the Lord May 2, 2022. She knew that very day her family would be okay and uphold her legacy so she finally got to go where she strived to be her whole life and that was right through those pearly gates. A service of praise and celebration will be held Saturday May 14, 2022 at 1pm at Antioch C.M.E. Church. Visitation will be held Friday from 6-8pm at Antioch C.M.E Church Interment will be held Monday May 16, at 10am at the Texas State Veterans Cemetery.
Linda Ruth Henson McGee was born October 18th, 1942 in Abilene, Texas to Doris Mae Carroll and Robert Henson. Linda met Jesus at an early age and was baptized at the age 7 and a half at the Antioch C.M.E Church in February of 1950
Linda was raised by maternal grandmother Fannie Johnson. She attended the black kindergarten located in the basement of Antioch C.M.E. Church, followed by Woodson Elementary and then graduated from Woodson High School May 26th, 1961 as an honor student. She then went on to attend Huston-Tillotson College in Austin. Linda had a career at Timex for 10+ years and retired from Betty Hardwick HMHR after 26 years. After retirement, she worked at AIDS resource center until they closed for a couple of years. She would later become a decorated foster grandparent at Woodson EHS and Day Nursery of Abilene from 2000-2016 until she began her lengthy battle with dementia. All of her babies and teachers were her pride and joy and were sad to see her go. But she knew it was time to rest and let her family do what she’d always done for us and that was give her the most comfortable life possible as she deserved. She held on strong for well over 6 years. The way she fought the battle was unspoken in this day and age with dementia. But she was an exceptional woman her entire life and this disease was no match for her.
Linda was a devoted and loving child of God, wife, mother, grandmother, great grandmother, aunt, cousin, and friend. She loved to teach the word of God and lived by her faith up until the end. She loved to dance and sing, help and uplift others and would give you her last no questions asked. She was a devoted member of Antioch C.M.E. Church where she served with the missionaries, as a youth director, and sung in the choirs, and was the announcement clerk as well. She never met a stranger. Her proudest accomplishments in life were her two beautiful children Tamara Lynn Hunter and Reginald Bernard Hunter. Her granddaughter/daughter April Latresa Hunter and great granddaughter Dei’Janae (DJ) Monique Turner and seeing them all graduate from high school. ( She made it until DJ finished). Also seeing and holding April and DJ the first time and watching April get her nursing degree from Cisco College. "She wrote all of this down yall" And last and certainly not least her husband and partner for 52 years Edwin G. McGee whom took in her kids/grandkids as if they were his own. They lived a match made in heaven until her last day on this earth. Now tell me she wasn’t in God’s favor? Oh what a life.
She was preceded in death by her mother Doris, father Robert, grandmother Frannie Mae, brother Charles, and a multitude of cousins. (I know her and Loretta missed gossiping and boy they have plenty to catch up on.)
Left to cherish her memories are husband of 52 Years, Edwin McGee of Abilene, son Reginald "Hunter Cat" Hunter (Terretta Gray) of Kilgore, TX, daughter Tamara "Sissy" Hunter (Charles) of Abilene, grandaughter/daughter April Hunter (Michael Crump) of Abilene, great granddaughter Dei'Janae "DJ" Monique Turner, cousins Dianne Portlock (Jim) Kimberely Ferebee (Billy). Numerous nieces, nephews, extended family and many friends. Services entrusted to North's Funeral Home. Online condolences may be made at www.northsfuneralhome.com

All rights reserved. This obituary is also archived at obittree.com